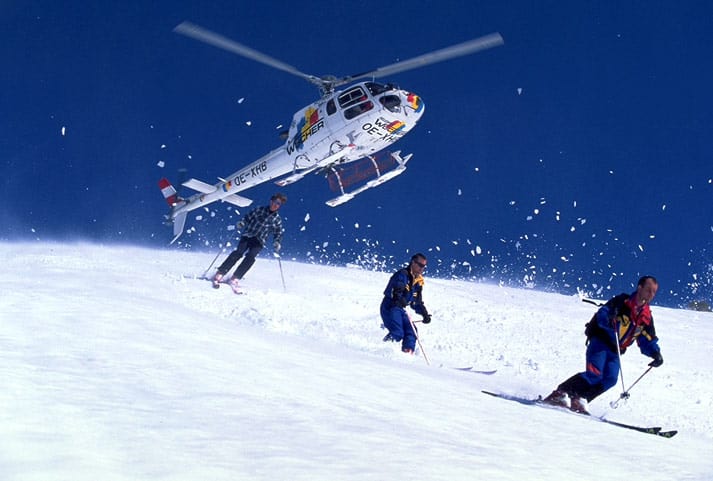 As we worked away in our Chicago offices last week, a group of five skiers were Helicopter skiing along the Columbian River basin in British Columbia. What is so special is that each of the five is over age 65 and three of them are able to ski because of the care received in my office. 15 years ago, while I was still a joint replacement surgeon, one of the five underwent a uni-compartmental knee replacement. About six years later, because of progression of the arthritis in the remaining compartments of his knee, I converted the “UNI” to a Mobile Bearing Knee Prosthesis. Fast forward to 2012 when I began Bone Marrow Aspirate Concentrate/ Stem Cell interventions for an arthritic joint to postpone or prevent a joint replacement. The patient for whom I performed those surgical reconstructions presented with end stage arthritis and thus would not have been a candidate for a Cellular Orthopedic Regenerative procedure. The other two skiers ascending the slopes via helicopter in search of fresh limitless powder have undergone Bone Marrow Aspirate Concentrate / Stem cell procedures over the last 24 months and there they are enjoying an ultimate skiing experience as “master “ skiers. As a point of reference for my notion of the continuum of care for the scope of cellular orthopedics, one of those two has undergone the procedure several times. The first year, it was for the left knee. The second round was for the right knee and this year, a “refresher” for both knees. While actually thinking about this Blog, I received the following ALERT real time from the lodge –I just received word from the five skiers that there is a blizzard so the helicopter couldn’t fly this morning but the group hopes to get out this afternoon.

If I have piqued your interest, read more about skiing here: Knee Stem cells in Chicago and Heliskiing-Regenexx.  Not only is the article of interest, you get to see what I looked like in 2012 in my retro ski outfit.

The January 13, 2015, article Stem Cell ACL: Cutting Edge Knee Repair Sans Surgery appearing in www.onthesnow.com is also informative and it features one of my five alumni.

Reader be aware, Cellular Orthopedic benefits are not only realized by heli-skiers. What happened next to those skiers was that the rains came and that resulted in a premature ending of their Canadian Mountain Heli-skiing adventure. Now for the happy outcome, the group went back home and this week, each member is preparing for a repeat ultimate skiing endeavor by returning to training on their road bicycles in this balmy weather.